Build a tower to build relationships. The perfect cooperative game and team building activity for the beginning of the year. 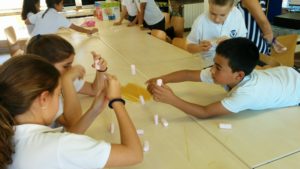 Working together as a team is an important skill in our classroom. Well, probably not only in the classroom but generally in life. We’ve got different tasks, projects to accomplish which usually easier in a team. Yes, of course, you can say, it depends on the team members. This is why I started this school year with a simple and fun collaborative game.

The point was to promote collaboration, to build relationship, to promote positive classroom environment, to have a good laugh together. After the activity students can also reflect on the IB learner profile they used or should have used during the activity. 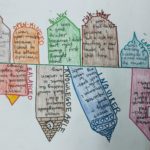 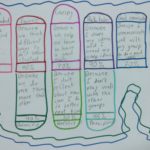 The challenge is simple and you need only two ingredients: half packet of spaghetti and a packet of marshmallows per group. Because of the supplies, I called it the marshmallow challenge.

How we did the Marshmallow challenge:

It was interesting to watch them how they advance, communicate, reflect and change direction. In these 20 minutes kids were fully engaged, innovative and cooperative. So the activity served well what it was invented for.

Also as I was walking around, I couldn’t help but notice that some kids love working together, feeding the others with new ideas but there are some others who like building their own towers and experimenting alone with it. I took a mental note on it, considering different learning styles.

Well, this our marshmallow challenge was not the best activity to promote that, but I decided to let them carry on the way they prefer working in. The interesting thing about it, that their group wouldn’t mind it either. So whenever they finished with their own experiment that would give their group the best result, they joined the others again to support the group with their idea.

Although our on-line stop watch was projected during the time kids constructed their towers, time to time I kept reminding them of their time was running out. Just to make sure it wouldn’t strike them when I shout out: “Hands up!”

As their time ran out they couldn’t touch their construction anymore. I made them sit down so everybody could see the towers of their peers.

Now it was time to measure and compare. Identify the winning team and saying the magic words:

“And the winner is…”

BIG APPLAUSE and CHEER for the winners.

Discussion about the winning construction considering the behaviour of the group members and the feelings of the individuals during activity.

Individual reflection on the activity using IB learner profile to see where and how to improve in the future. 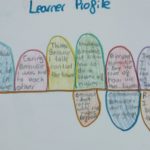 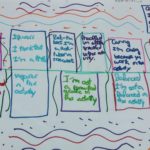 Have you got any favourite activity you promote collaboration? Let us know in the comments below.